Welcome to part 2 of my conversation with Hanna Khoma, a Trilingual mother and fellow YouTuber. We’re talking about bilingualism and some common concerns and misconceptions people have about bilingualism. I’m sure you’ll enjoy it and find it useful.  You can check out her channel called English Fluency Journey.

Watch this interview between Kayla Chalko and Hanna Khoma about bilingualism in action!

What resources can non-native English speakers use to help their kids learn to speak English?

Hanna: For non-native English-speaking parents, what can they use to help their kids to learn to speak the English language? What resources can they use? We’ve talked about books. Maybe cartoons in English or some apps can help. Is that a good idea to use that?

Kayla: Yeah, I think it is. If you’re not a native speaker, relying on and utilizing other resources with some native speakers is super smart. I think a lot of parents go for TV and movies that tend to be American English if it shows on TV.

Hanna: Yes. So, Alex watches, I wouldn’t say, just American cartoons and British, but this is an interesting thing because he is learning a huge amount of vocabulary and sentence structure from cartoons. Of course, we control the amount of cartoons he watches and what he watches.

Hanna: But honestly, at this point, he is the one teaching us sometimes some new words or expressions or even conceptions that he’s heard in cartoons. He usually comes up to me and tries to explain what he just heard and what he saw and learned. For example, about fire, that is dangerous, and he comes up to me and starts explaining like, “Mom, it’s dangerous.” “Yeah, when there’s fire, you should put it out or just hide. You shouldn’t breathe that smoke.” Yeah. So, this is pretty interesting.

Kayla: Oh, how neat. Yeah, exactly. I can’t name any specific programs or apps right now, but I would encourage parents to think critically about it. Many cartoons use baby language or incorrect sentence structure, in general, because they’re trying to be funny or could get entertaining, especially on YouTube. There’s just a lot of stuff on there that’s like, “This really isn’t a good example of language at all. It’s entertaining, but it’s not correct.”

Kayla: Say that again. What was that?

Hanna: I was wondering, “Okay, was that correct? Can we say that?” So, apparently not.

Kayla: Yeah. There’s just a lot of goofy stuff out there, as well as funny cartoon voices, right? That would totally throw off the pronunciation of language at all because they have a cute little monster voice, maybe, let’s say. If you’re trying to use cartoons as a way for your child to strengthen their English skills, then really do some research on finding something that at least has correct grammar and things like that. So, here, in America, we love Sesame Street. We love shows like that that are focused on education. Even still, Elmo has a funny voice, and Cookie Monster has a funny voice, but they’re kids, so we pick and choose. I wouldn’t want every cartoon example to be something that is totally crazy. Maybe find something a little more educational.

Kayla: Okay, it sounds like it was too academic for him.

Hanna: Yeah. Now, he starts to be really into just some scientific stuff, I would say. He loves to learn about insects, and it should not be a cartoon. It can be something like a scientific program or something.

Kayla: Yes. Growing up, I loved the Discovery Channel or Animal Planet. It’s what we had, and it was real videos of animals and people with animals teaching you about it. So, that’s a good example. Yeah, that would be science-related as well.

What are the benefits of raising a child as bilingual?

Kayla: The research coming out saying what those benefits are is so exciting, and it makes me really motivated to spread this message about bilingualism. It’s good and doesn’t cause speech delays. So, some of those benefits are learning new words quickly, in both languages and new languages. If you start teaching a child Mandarin after the age of 5, like we were talking about before, that’s how the child os going to have a knack for languages. As well as being able to use information in new ways. It’s called “mental flexibility.” Similar to problem-solving. Because they’ve already been challenged with these 2 different languages, their brains are better at using the information in new ways. Putting words into categories efficiently, just like your child, Alex, is already doing. It’s like, “I know these are Ukrainian, and now, I’m going to translate it to English. I’m going to talk to Grandma in Ukrainian.” His categorization skills, which are abstract and happening within the brain, are strong, and that’s going to help him later down the road with some more complex language learning within school.

A couple more benefits include good listening skills, which is amazing. So, that means that comprehension. Because they’ve already had to listen to choose different types of languages, that strengthened their auditory comprehension skills, and that can tie over to reading comprehension as well. And then, lastly, connecting with others. Having experience in one language and one culture as well. Language is a huge part of the culture. We’re finding it’s giving children and people this flexible ability to be like, “You have something unique about you.” “I have something unique about me.” “You’re a little different.” “Hey, you said this word differently than I did, but let’s talk about it, and let’s communicate about communication.” So, it’s just giving a broader experience to children, and that can bring people together. Those kinds of differences, unique abilities, and skills.

What is the best way to teach kids how to read?

Hanna: I wanted to ask you about how best to teach kids to read. It’s not a problem right now, but it’s tough to show him even simple words because he’s like all over the place and doesn’t pay attention.

Kayla: Okay, yeah. I mean, little boys have a lot of energy.

Kayla: It may be that the task is too formal. He just wants to sit and focus on this. So, we can still strengthen a child’s reading skills without being like, “Okay, come and sit down. We’re doing some flashcards, and we’re writing things, and I’m teaching you.” I have quite a few kiddos I’ve worked with that as soon as they know I’m trying to teach them something, they’re like, “I’m going to try and sneak away.”

Kayla: “I don’t want to be taught right now. I don’t want to listen right now.” So, that caused me to rethink how I’m teaching. Especially with young ones, even 4 years old, I try to do more play than a formal “teaching” time. So, with your kiddo, let’s say, you’re walking down the road, and you see McDonald’s or one of his favorite restaurants, “Oh, what do you see over there?” “Yeah. I knew that was McDonald’s because it has a big M on it.” And you make a big M in the air. “Let’s have a picture with McDonald’s later.” Then you have an excuse to write the word McDonald’s.

Kayla: But pointing things out within life that the kids are already interested in is one way to encourage print awareness; that’s what we call it in the field. Being aware that words have letters and letters are put together to make those words, rather than something formal, “Let’s sit down, and I’m going to teach you everything.” That is a preschool kindergarten skill, but it may take more motivation for a child, like your child. “We’re doing 5 minutes of this, and then we get to go do water boards outside.”

Hanna: Okay, thank you. That’s a great tip. I’m gonna try those for sure. I noticed that he’s learning better at daycare or preschool. He actually sits, and he actually does something that he doesn’t want to do here at home with me because he knows I’m a mom and “I can just play and fool around.”

Kayla: That is 100% true. I used to be a preschool teacher for years, and I heard parents saying, “Oh, my gosh. They don’t do that at home.” Sometimes it was positive things, and sometimes it was negative things, like not great behavior. But children are smart. They know how to act in this area with this person in that area, and that’s very typical, I would say.

If a child has a speech delay is it better to focus on just one language?

Hanna: What if a child has a speech delay or difficulties? Can you include learning another language in this situation, or is it better to focus just on one language?

Kayla: That’s a great question. Yes, you can include another language in your child’s learning even if they already have a speech delay. It’s not going to cause a worse speech delay. It’s not going to confuse them. But again, I want to emphasize what we talked about at the beginning of giving strong correct language examples. So, if a child already has a speech delay or doesn’t have a speech delay, if we’re going to introduce another language, it needs to be one that I’m using proficiently and correctly so that I can continue to teach a child with correct examples.

Hanna: Yes, okay. In my case, I speak English with Alex most of the time and very rarely in Ukrainian. I wonder how much time a parent should talk to their child in a second language on average for them to use it at a native level if a parent is proficient in that language?

Kayla: Right. I don’t think there’s a magic number to say a certain amount of time in one language and then another amount of time in another language. I want to encourage families to do what’s natural for them. If English is coming to your mind as a mother at the moment, then speak English to your child.

Bilingualism and Speech Delay: Your Next Steps

Is your child being raised in a bilingual home and is showing signs of speech-language delay? Parents should first contact a speech-language pathologist who is trained in servicing culturally and linguistically diverse children. If a bilingual speech therapist is not readily available, you may need an interpreter.

Guidelines for best practice suggest that evaluation and treatment in a child’s home language help build a stronger foundation for further speech and language development.

The earlier you get in touch with a speech-language pathologist, the sooner you can get your child the treatment they need to develop their language skills. 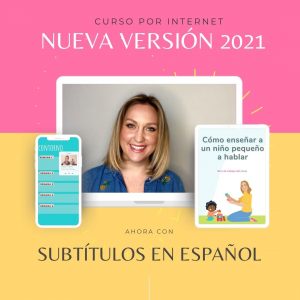 Looking for more help? Consider my online course called, How to Teach a Toddler to Talk. Now available with English and Spanish subtitles.