How to Decrease Tantrums 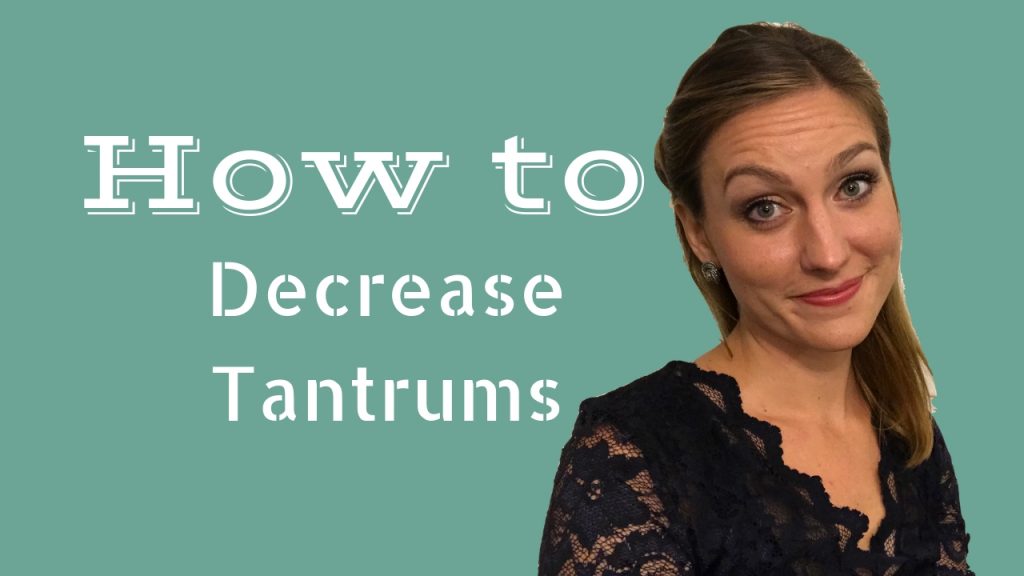 I have five tips to share with you that I have personally used with toddlers for over 10 years and I hope you find them helpful.

If your child is upset about something that he can’t have or can’t do at that moment, distract him with something else. This is, for the most part, music for me. I have a relaxing, calming song that I use to distract kids. Then, when the music is done, then we can move on with whatever we need to move on with. They’ve usually forgotten about what they’re upset about.

Now, disclaimer. I want you to be careful to say we are trying to distract not bribe. Okay?

Don’t let your child be the boss! Right? Don’t give in to the manipulation of the tantrum. It’s really hard, I know. I’ve been there, where it’s like, “I just want to give in!” But don’t, because—remember—you’re not just raising a two-year-old right now… you’re raising a future eight-year-old and twelve-year-old and sixteen-year-old. You want to make sure that your child learns from early on that you can’t be manipulated. So, be careful. Avoid the bribing.

Really avoid things like candy. Yeah, it usually works, but the problem with candy is the sugar. Sugar is rewarding to the brain. It is literally using a chemical to tell the brain, “Wow! I just got rewarded! Woohoo! I like that. I like sugar. I cried, and I got sugar. I’m going to cry more!”

Don’t do it! Because they’ll learn. They are smart and they’ll learn: “I cry, I get candy.” So, be careful of that. Avoid the bribing, avoid the candy.

Again, we’re not just raising a two-year-old. We’re raising a future teenager. So, they need to learn that when Mommy says no, Mommy means no. I use that phrase all the time. I use, “Kayla said no.” That’s how it is. Okay? It’s tough, but they learn. They really do, and it’s important for them to trust you.

There’s a certain amount of security that children get from knowing what to expect. So, if the rules are consistent—if Mom and Dad and all the caretakers are consistent— then eventually they learn to trust your word more.

I call this tip, “Don’t Watch the Show.” The show is the tantrum because that’s really what it is, right? They’re putting on a show—a big, dramatic performance! Don’t be an audience member.

Literally, turn away. (You are still in the area and taking care that the child is supervised and safe but not giving direct visual attention to the behavior). This is actually written about in books and it’s called different things, but I call it, “Don’t Watch The Show.”  Turn away from the tantrum. You do something else. Okay?

Go ahead and distract. We talked about that tip: distract. You go and play bubbles. You go listen to a song. You just enjoy that song on your tablet, and you start singing it and having fun. Guess what? I’m telling you, I see it happen all the time. The kids get bored and they think “Uh, oh. Mom’s being consistent again! She really means no…Look, she’s having fun over there. She’s blowing and popping those bubbles…All right. I give up.”

And they give up! They come over and they start playing or watching the video with you.

Sometimes, they’ll stop crying just for a little bit, and then they’ll pick right back up. So, what I usually do is I count to five in my head as I’m distracting and having fun on my own over here. Then, if I hear them stop and I count to five in my head, then I might turn to them and I might say, “Oh, are you ready? Want to come?” (I use a really soft, calming voice.) I’m not talking about the crying or reminding them of what they’re upset about. I’m just saying, “Are you ready to come? Come on!”

You can encourage them, but not beg them of course. Most likely, they’ll come over and they’ll forget about it. But, if they pick up their tantrum again repeat the process and go back to having fun with whatever you’re doing.

Now, I want to put in a disclaimer. Of course… YOU are the parent. You know the difference between a fake cry and a real cry. Well, sometimes kids really do work themselves up. They started with the fake crying, and now they really are physically upset. For some kids, they’re not very good at self-soothing—calming themselves down.

So, let’s say we’ve tried the “Don’t Watch the Show,” and we’ve tried the distraction, and we’ve been consistent, but they really have upset themselves. Then… it’s your call. You know as the parent, when it’s time for you to provide comfort and help soothe them because they’re not able to do it on their own.

They may need a really nice, deep, big bear hug. A big, nice squeeze can be calming to the sensory system for most kids and helps them just kind of regroup and center again. Give some pats on the back and maybe give them some rocking in your arms.

These 5 tips are not for everyone and you should defer to a child psychologist or a behavior specialist if you are having a lot of trouble with your child’s tantrum and behaviors.

Reward when they have either soothed themselves or allowed you to soothe them. So, when the crying is done… reward them. Let them know that you like that. Give a little special attention to that positive behavior.

I say things like, “Oh, good job. I see you’re not crying. I like that! Oh, that’s a happy girl. You make me happy.” I just spend a few moments talking about how good they did. They stopped crying, and how I really like that. Okay? 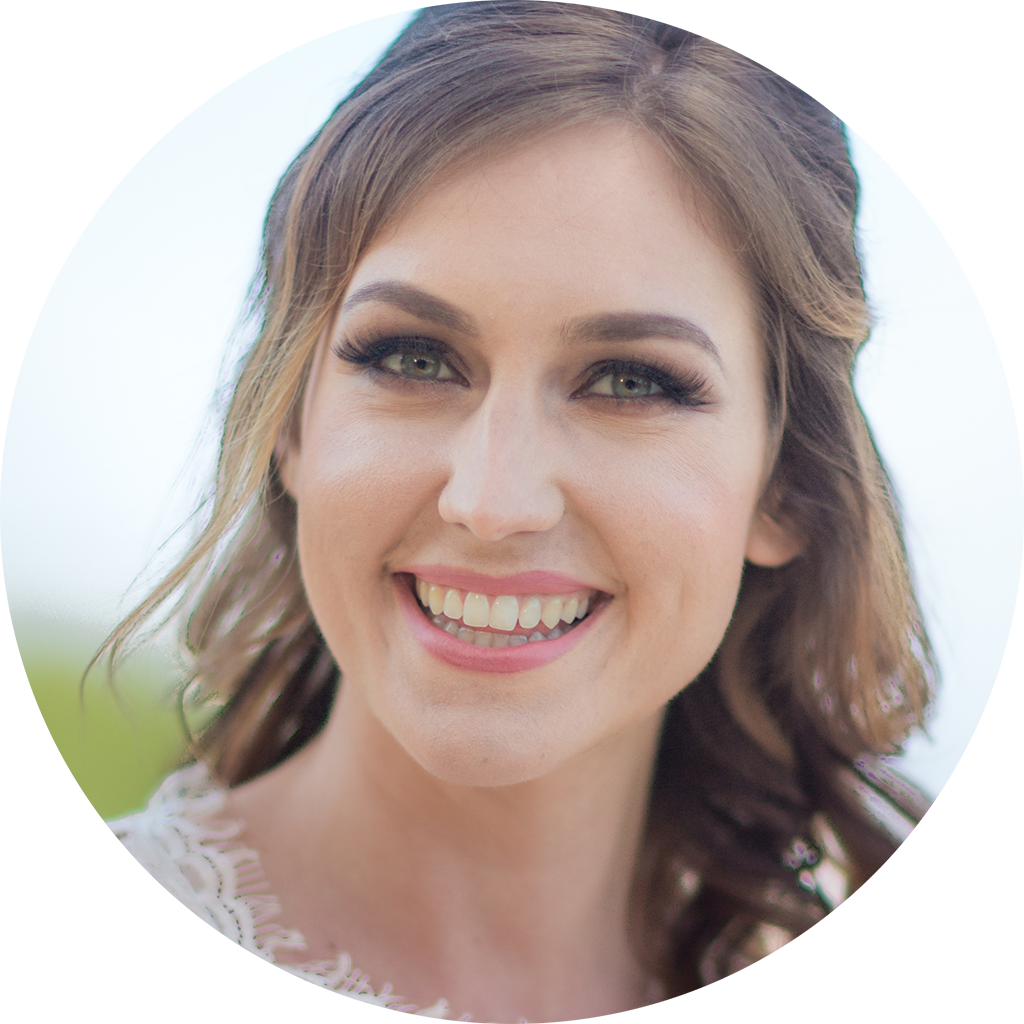 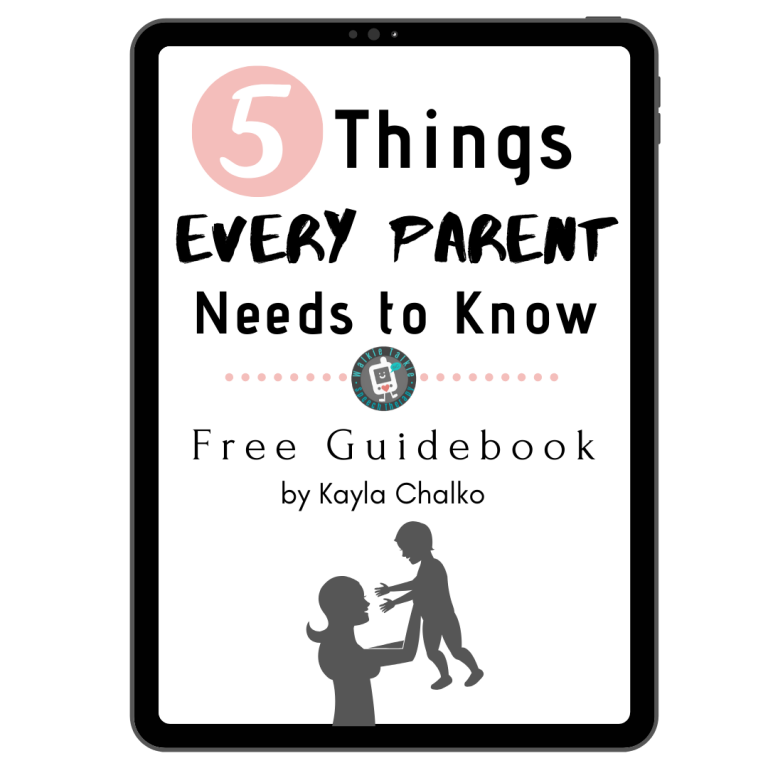 Get your free guidebook!

Receive my mini-guidebook 5 Things Every Parent Needs to Know by signing up to my newsletter where you’ll also receive weekly tips from me with special offers.