What Causes Speech and Language Disorders? 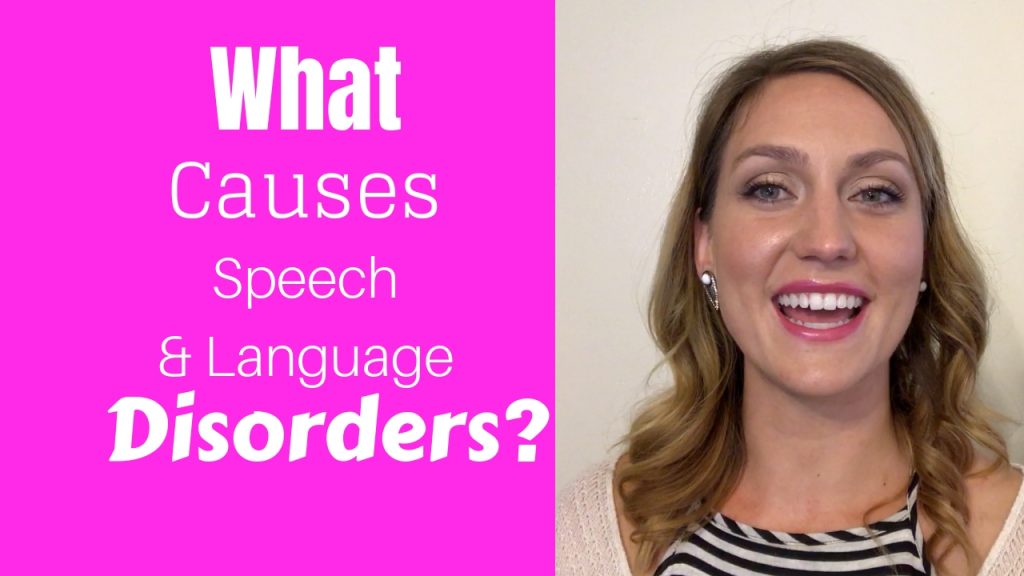 Let’s go through the 14 identified reason for speech and language disorders – and these are in no particular order.

I’m bringing this information to you today from ASHA: the American Speech-Language and Hearing Association. Let’s go through the 14 identified reason for speech and language disorders – and these are in no particular order.

Now, what that means is that there is a genetic component—and that’s definitely beyond your control as a parent. It just is what it is.

Now, this is a big one that people don’t always think about or look into. As a speech-language pathologist, I always check a child’s file to make sure that they have had a hearing screening—hopefully recently! All children in America go through a newborn hearing screening but it’s important to also get your child’s hearing checked later on, especially if a speech and language delay is happening because that can often go undetected.

If you’re noticing that your child may not be not following directions, not turning to their name, not reacting to noises (maybe a siren outside or a crash in the kitchen)- those are definite red flags that you want to pay attention to and seek a hearing evaluation.

Maybe, though, your child is turning to noises, but they’re not attending to voices as much. Maybe they hear the dog barking, but they don’t hear you calling their name. “Adam, Adam!” and they’re not turning to that.

If your child has had frequent ear infections, that’s also a big risk for hearing loss. When their ears are infected and full of fluid, their hearing is impacted and they’re not able to hear clearly.

You may not be able to tell that your child has an earache or ear infection. Maybe they’re not showing signs of pain. So, keep an eye out for it. If you haven’t had your child’s hearing tested and you are noticing speech and language delays, get it tested. I’m telling you, it’s worth it.

I don’t want this to scare you—a lot of parents are really scared of autism, but autism is inherently a speech and language disorder and social communication disorder combined together. So, if you’re seeing social delays in your child as well as speech and language delays, that’s definitely an indicator that autism needs to be looked into.

What that means is that your child is cognitively delayed. That can be for a variety of reasons, but when that little brain is not working quite right, then that does mean, often, that speech and language are going to be impacted, as speech and language starts in the brain—just as everything else does.

Now, that’s syndromes like Down’s Syndrome, Fragile X Syndrome and so on, which are commonly diagnosed at birth.

This is caused by a mother consuming alcohol during the pregnancy. That can have many terrible impacts on a child, including speech and language disorder. This is diagnosed at birth as well.

Now, this is not a very common one, but it’s definitely impactful. Stroke is when there is a blockage of blood flow and oxygen to the brain, causing brain damage.

This can be in utero or after birth.

A type of cancer.

This component starts pre-natal, too. We just talked about fetal-alcohol syndrome and how impactful that is. What a mommy puts into her body does affect the child. I’m not a nutrition expert, but I have been learning and researching along the years, and I have recently learned that not only nutrition for a healthy, strong body and brain is important but also being careful to avoid different toxins. Like, heavy metals—especially lead. If you are living in a home that is older—built before 1978—then there is a risk that your home may have lead in the paint and in the environment.

Be careful about the water too—the water pipes are a place where lead can be found. That is linked to developmental delays and speech and language delays.

So, if your house is older, get some water test strips.

Also, we are learning in health foods science that food dyes are actually affecting children and causing behaviors like hyperactivity. While hyperactivity and a language disorder are not the same thing, IF your child is hyperactive their learning capabilities are impacted by their lack of focus.

This means that a baby or child has given up the will to live, based on trauma and life experiences.

If you’re sitting here listening and you’re like, “Gosh, Kayla. Those fourteen reasons you listed…None of those! I can’t identify any of those. We’ve looked into hearing loss and we’ve looked into autism and there’s no family history.”

Honestly, the other piece of it is sometimes… we just don’t know. Sometimes it these things just happen. There’s more research to be done and I’m excited to see what we find in the years to come.