With the worldwide pandemic and ongoing quarantine restrictions many businesses, including my own, have had to suddenly pivot and provide services online rather than in person.

Virtual Speech Therapy (also called Telehealth or Teletherapy) has actually been offered by our field for about a decade but was mostly used for older kids and adults. I always had an interest in providing online therapy but never got around to setting it up since our in-person services were in such high demand here in San Diego, California.

While the research supports that telehealth can be just as effective of a means of service as in-person sessions, even for toddlers, I wasn’t personally convinced it would be just as effective. Now that I have been providing teletherapy for 3 months and I am happy to report that each client has made positive progress on their goals.

Let me share the experiences of one of my first teletherapy clients, who I will call Adam.

Adam had never met me, never had speech therapy, and had limited exposure to video chatting or TV. We started services right before his second birthday with a virtual evaluation. Based on parent report he had a global developmental delay which means that he is significantly behind in all areas, including speech, fine motor, gross motor, play and cognitive skills.

I did not feel very confident that virtual therapy was going to be a success for him but I’m happy to report that he quickly proved me wrong. Due to his limited exposure to screens and TV, which is a good thing, he found interacting with me on the computer to be wildly entertaining. I think he thought I was his own personal clown. Singing became his favorite activity and with the help of his mother he began learning to participate in the song activities with me by copying some of the hand motions. This may seem like a minor accomplishment, but if you’ve ever taken my online course, then you know how monumental the milestone of “learning to copy actions” is in the process of learning to communicate. During the second 30 minute session with Adam, his Mom joyfully told me that he had learned 7 new words in 7 days! That’s a record in my book! I was so excited for her. She followed through with the homework assignments and her child was responding well to her teaching.

After about 2 months of speech therapy, Adam’s vocabulary list expanded to 89 new words! I have to admit I teared up when I heard that his 77th new word was my name. So sweet! Those are the moments I live for. Adam’s mom tells me that he now asks for me incessantly throughout the week. Haha! 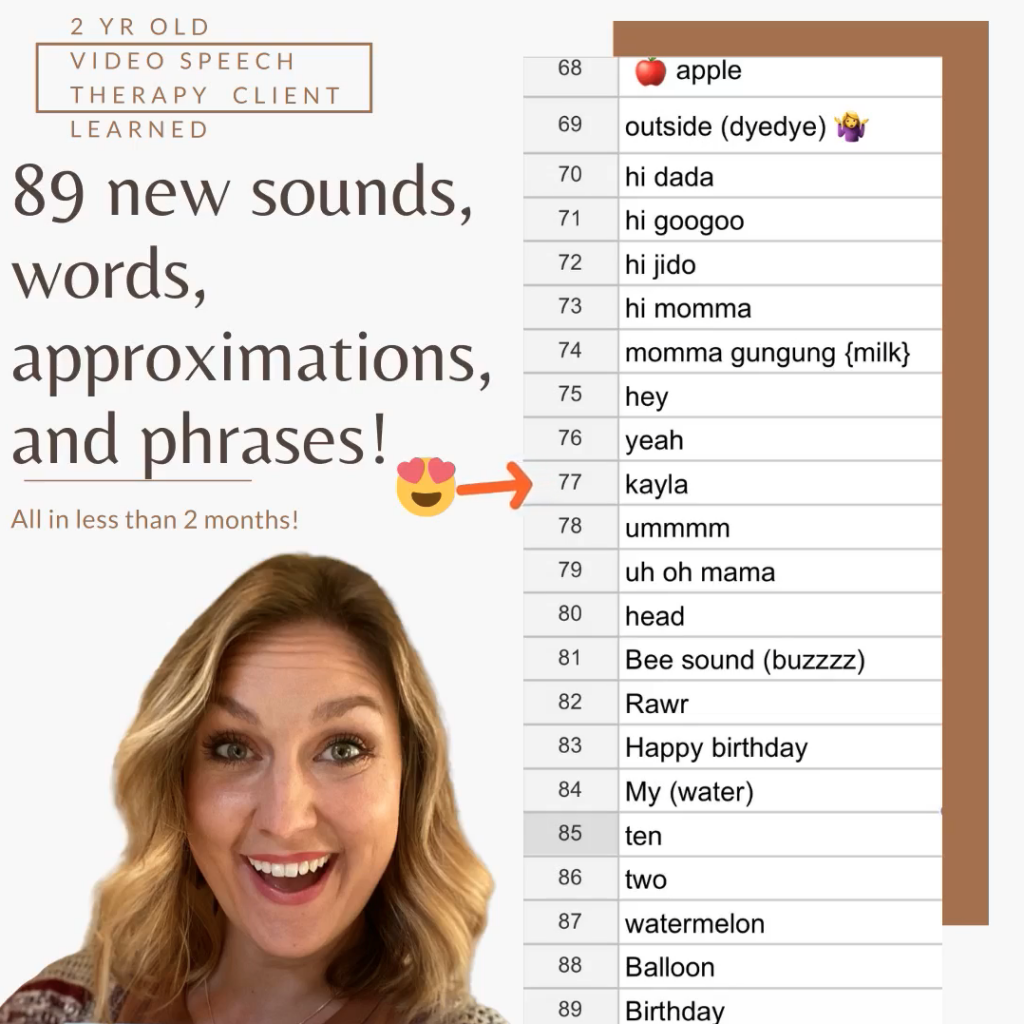 So while I began this process as a skeptic, I am now in support of the option of tele-therapy for young ones and will most likely continue to offer it as an option for years to come.

Stay tuned for an update on Adam’s progress.

Reach out to us if you are in California and are interested in virtual speech therapy. Otherwise, consider our online course for parents.